The Kinugawa river that flows through the valley praising the abundant amount of dark green water. Kinugawa Onsen has an impressive view of the scenery of many hotels and ryokans on its riverbank, which began as a hot spring for Nikko daimyo and priests. The Kinugawa Onsen is attracting attention as an optimal base for cyclists enjoying Nikko by bicycle now. Nikko · Kinugawa area As the first “cyclist welcome hospitality” in the area, it is conveniently located a 5-minute walk from Kinugawa Onsen Train Station. It is surrounded by rich greenery along the valley, a hot spring inn, Kinugawa Park It’s hotel. Kinugawa Park Hotels with four types of guest room buildings offering a variety of enjoyment methods on a large site following the Kinugawa River. All of them are “cyclist welcome” houses best suited for bicycle journeys.
When approaching, it is the saddle type bike rack that we will greet you first. Even at check-in, there is nothing to worry about where to store the road bike. After checking in, I would like to relax while watching the rippling flow of the Kinugawa River in the calm classical atmosphere room (Suburban tree pavilion). According to the purpose of the trip, the number of people, the budget etc. at Kinugawa Park Hotels, you can choose rooms from the four kinds of guest rooms, Kinjyotei, Kinnakan, Wooden House and Park Cottage.
Among them, it is comfortable for riding a bicycle for adults, a room suitable for couples and families, a small number of people traveling, all rooms facing the Kinugawa valley, guest room “next door of wood” with in-room bath.
Furnaces and furnishings are decorated with ancient Japanese colors, patterns and designs, creating a cozy and luxurious atmosphere. I also am glad that the loaded road bike that I brought in is just fitted into the wide space using the prepared vertical type cycle stand. Even for a journey to enjoy cycling, if you are a couple’s trip, for example, after you get off the saddle, you want to enjoy private time and space steadily. “Kinjyutei” of Kinugawa Park Hotels is a room which is also called “authentic Ryokan style ryokan” which is perfect for such a cyclist couple with a sense of separation.
The production of thorough private feeling also appears in the way of check-in.
In case of staying at Kinjitei, if you inform it so beforehand, you enter from a wooden “Private Gate” dedicated to Kimchatei, separate from the hotel front entrance, and check in there You can do it. It seems like a small attraction, and is not funny about playfulness. After entering the private gate and completing the check-in procedure, pass through the goodwill and go to the entrance exclusively for Kimchatei. The corridor of the stone of Kinjotei is a calm atmosphere. Each of the twelve-monthly guest rooms has its own approach, which enhances the sense of privacy. Of the rooms taking the name of 12 months of Kinjotei, there are stone outdoor baths in the four rooms from January to April, and in the second and second month of May, a cypress built outdoor bath is attached There. Among them, the most popular is between June, with a cypress-made open-air bath and an inner bath of pottery (Cool month).
Wide garden with Japanese style overflowing with seasonal decor with viewing from the room, you can also slowly and quietly look at the Japanese cypress bath. The structure of Kimchatei varies according to the room, but in June, it would be a good idea to arrange road bikes side by side on a vertical stand in the space which came up to the entrance. Another big appeal of Kimchatei is that you can get a special meal with board length waving your arm in the room.
Again, you will feel comfortable with the concept of Kinjyutei who values thoroughly the private.

On the other hand, it is the characteristic of Kinugawa Park Hotels that you can answer firmly even to the desire to enjoy cycling trips easily with cycling teams or groups such as teams and clubs.
In the “Kuraku-kan” which is the main building with a front desk and large public bath, it is centered on the standard Japanese style room which considered usability first. Rooms of various sizes and shapes according to the number of people and purpose are prepared.
Especially, a large Japanese style room where 8 to 10 people can accommodate will be useful in cycling trips and training camps in groups.
Here too, you can carry a bicycle in the cabin and store it, using a vertical type cycle stand.

When bringing a bicycle to a wooden building or a guest room on the upper floor of a wooden pavilion, you are going for a bicycle on the elevator. Kinugawa Park Hotels’ elevator is large enough to allow two bicycles to have plenty of time if the bicycle is vertical. Of course, if you have other customers in the elevator, give way and want to be afraid not to surprise the bike when getting on and off. In addition, when it is troublesome to take a bicycle to the guest room on the elevator, or when it is difficult to put the bicycle of the whole group in the passenger compartment, for example, a separate building “Mon It is also possible to store bicycles in a large space in the room of the garden. In this case, you should inform the hope of that in advance. Yet another, Kinugawa Park Hotels has a Western style cottage-type guest room “Park Cottage”, which is rare in hot-spring ryokan.
Park cottages that are lined up along the Kinugawa gorge are private specifications where all the guest rooms have their own entrance.
Park cottage is located at the far back when walking from the front from the front of the premises, but its end is in contact with the general road, so if you are a bicycle, you can go directly to the outside and access your room directly Also interesting.
Besides, the park cottage has plans to stay without meals, a plan for only breakfast, etc. It is also possible to use the casually and flexibly even in the case of late arrival time or in case of budget emphasis It will be useful as an inn.

Park cottage is a casual western style twin specification that changed with other rooms.
The view of the Kinugawa gorge which looks out from the window is wonderful.
The bath in the guest room is a unit bath, but of course, you can enjoy the hot spring slowly in the main public bath (Tokyo Bldg.) Public bath or outdoor bath. Before putting the bicycle in the room, especially after running on a wet road surface, I want to remove the dirt on the tires and car body.
At the side of the entrance of the main building of Kinugawa Park Hotels, a water supply with a hose is installed, so you can get rid of bicycle here.

Of course, there is also a pneumatic pump compatible with the French valve, so when the air pressure of the tire is concerned, let’s put in air firmly for ride. After the ride which enjoyed the beautiful nature and history of Nikko / Kinugawa river, I want to heal tiredness at the best hot spring.
Fountain quality of hot spring is a weakly alkaline simple fountain suitable for recovering fatigue after exercise. At the Kinugawa Park Hotel’s main public hot-spring baths, a variety of hot tubs entertain the entertainment.
“Yakka Shipbuilding Bath” customized with a ship used as a line downhill of the Kinugawa River as a bathtub. And there is also an outdoor bath which is enclosed by a rocky rock. In addition, although it is charged with advance reservation system, there is also a nature-rich private garden private outdoor bath that can enjoy the hot springs slowly with coloring of the four seasons in a private green space enclosed by trees . After relaxing the comfortable fatigue of cycling at the hot springs, I would like to make a nutritional supply firmly with delicious meals.
Dinner included luxuriously the taste of the season “NIKKO CUISINE”.
The place and contents of the meal varies according to the season and the plan, but if you stay at “Wooden House” or “Kuraku-kan”, recommendation is a meeting with the taste of Tochigi to eat with a scenic restaurant “Tsunemi-tei” It is a meal. The breakfast served at the same Tsukimatei is rich in color, healthy and voluminous Japanese food. Let’s charge the energy firmly for this day’s cycling. If you rest your body slowly with hot springs and kaiseki, sleeping comfortably, I want to go out to ride the next day from morning.
At Kinugawa Park Hotels, we keep guests’ luggage at the front desk for free so that we can fully enjoy Nikko and Kinugawa cycling after check-out. Also, at the time of returning, it is nice to be able to sweat again in a hot spring (there is a time zone restriction).

Leave your luggage at the front desk in the morning, enjoy cycling along the Kinugawa River, and come back to lunch. For lunch, a series of cafe ‘waterside cafe terrace’ directly opposite Kinugawa Park Hotels is just right.
When entering the shop the water surface of the pond spreading in front of me is continuing until my feet. In an open atmosphere surrounded by a large window glass, talk about memories of the trip and devise a plan for the next cycling. It will be a pleasant time. 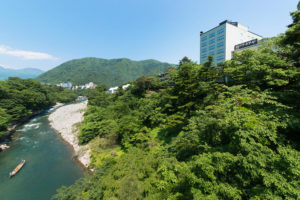 Kinugawa Onsen It is a ryokan full of trees. We have a variety of accommodation plans and day trip plan. We th...