The route has a hill climb route heading to Koyasan, which is known as the “Holy Mountain” and is designated as a world heritage site. You can enjoy cycling along while watching the beautiful scenery of the water and green mountains as they interweave together along the Arida River, which has holy water originally flowing from Koyasan.

You start from Hashimoto JR Station, which is on the JR Wakayama Line and pass through a hilly district lined with fruit, and then you will reach the underpass of Kouyashita Station, which is the starting point of the Koyasan Hill Climb Course.
From the Kouyashita Station, a long climb that steadily rises will continue to the entrance of the Daimon on Koyasan. The distance is about 18km.
As Route 370 and Route 480 leading to Koyasan are busy during the day, we recommend you to cycle to Koyasan early in the morning. Koyasan in the morning is also very enjoyable to look at.

After visiting Koyasan, you will reach the Arida River, which has holy water originally flowing from Koyasan. The scenery along the river is beautiful and then you go down the Route 480, which has plenty of beautiful views and afterwards you will arrive at the goal: Minoshima JR Station on the JR Kinokuni Line, which is near the entrance to the “Setonaikai” (Seto Inland Sea). The Arida River pours into the Setonaikai. 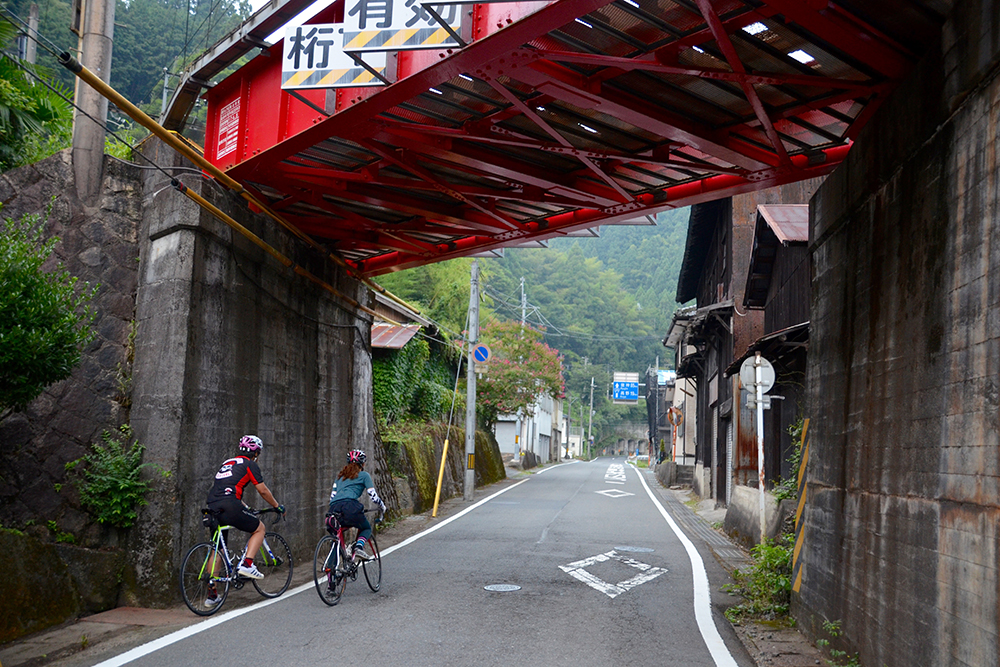 The starting point of the Koyasan Hill Climb Course is an underpass just next to Kouyashita Station on Nankaikoya Line by Nankai Electric Railway. This is the standard of local cyclists. 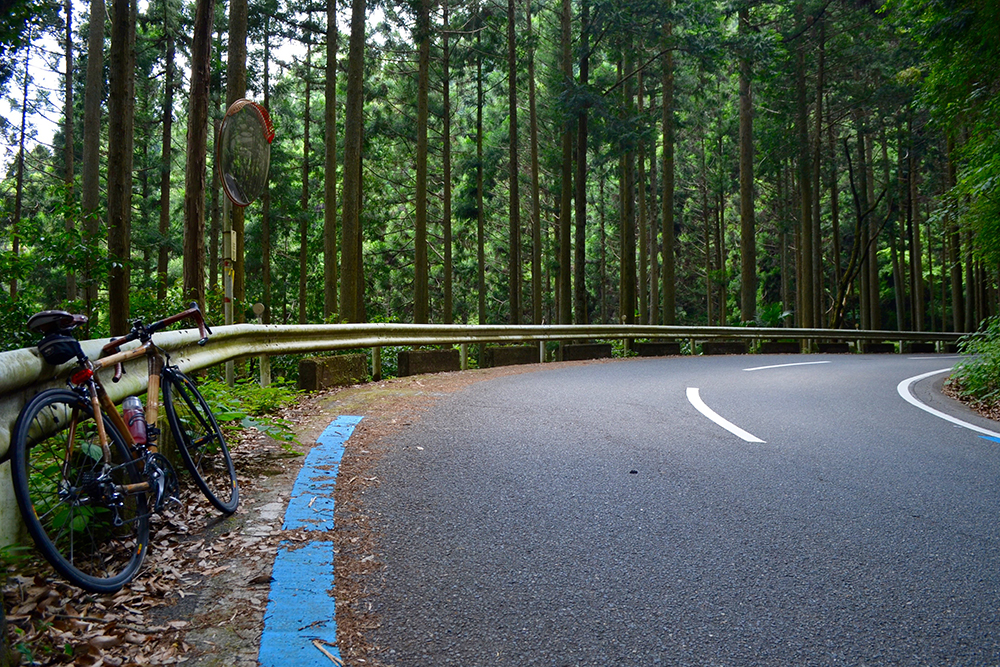 Here is the Blue Line showing that it is a cycling route belonging to the Wakayama 800, leaving the National Route 370. This road still has a good atmosphere of “Shugendo” (Japanese mountain asceticism incorporating Shinto and Buddhist concepts). 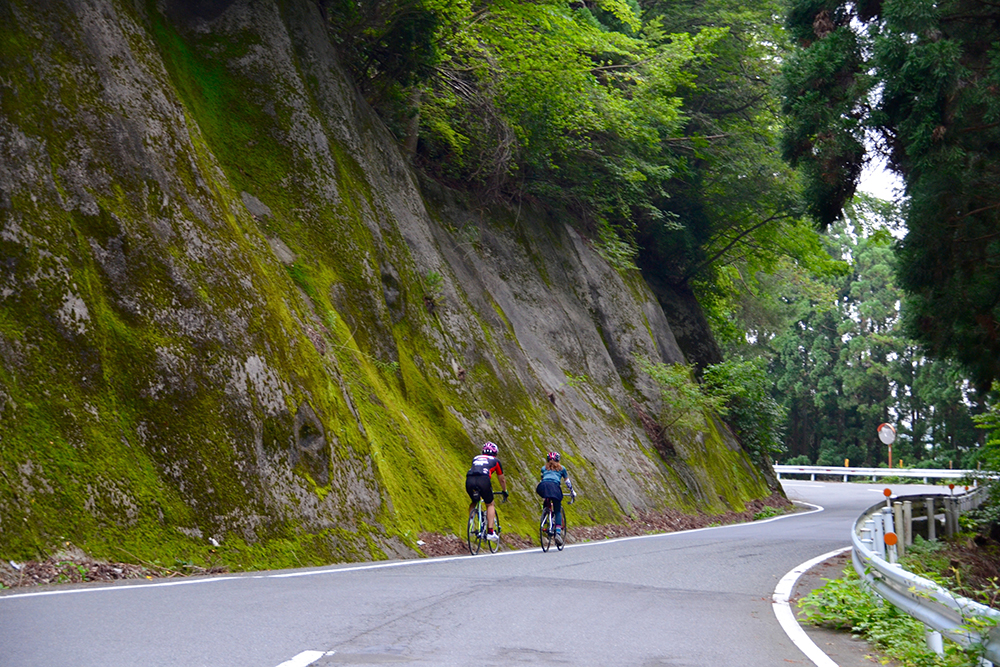 After you pass the Hanasaka Drive-in, you will finally start the full hill climb. The mossy rock wall will stir up the atmosphere as you ascend the mountain. 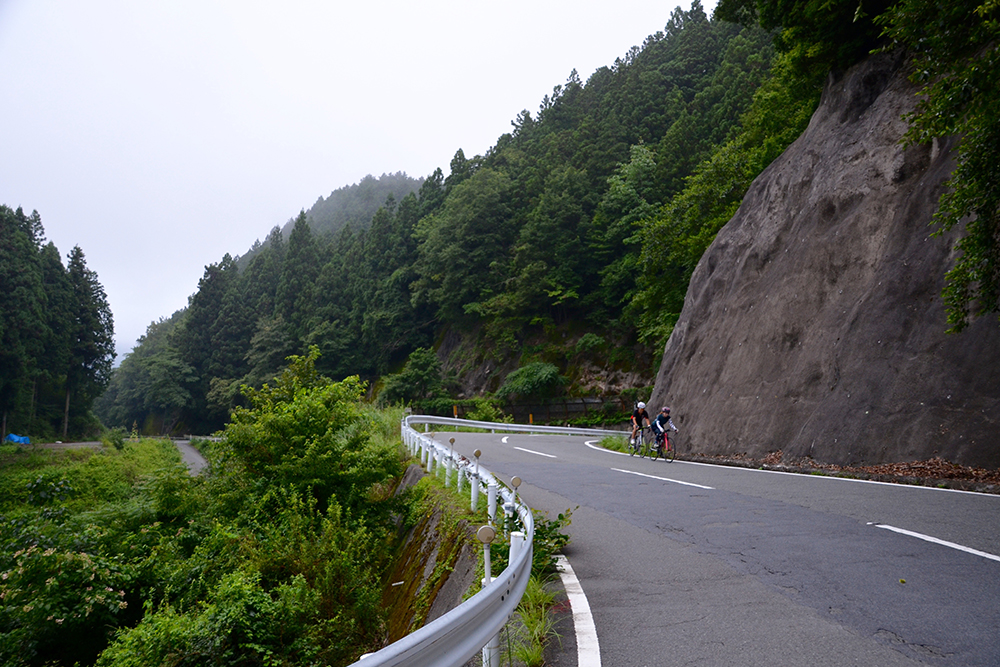 A few hairpin curves with good open visibility at the Koyasan Hill Climb. You can see the “Asa no Gongyou” (Morning Religious Service) only in the morning. It takes place at many temples and some temples burn “Gomagi” (a wooden stick on which prayers are written) wood which is brushed with a scented oil. 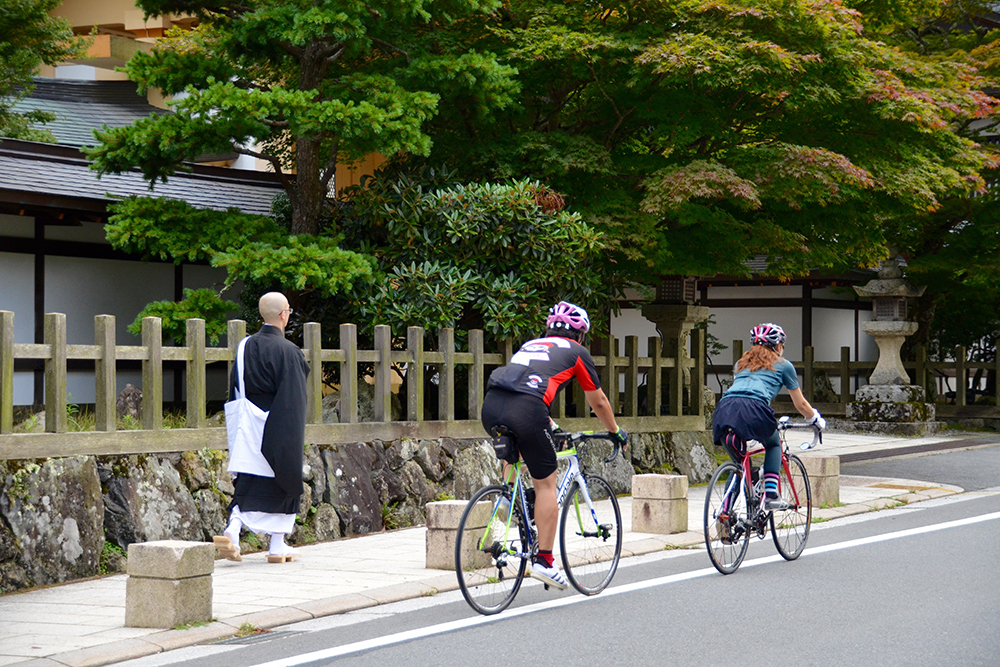 Another pleasure in the morning at Koyasan is to meet monks who walk around the temples before or after work. If they’re not busy, why not say ‘hi’ to them? 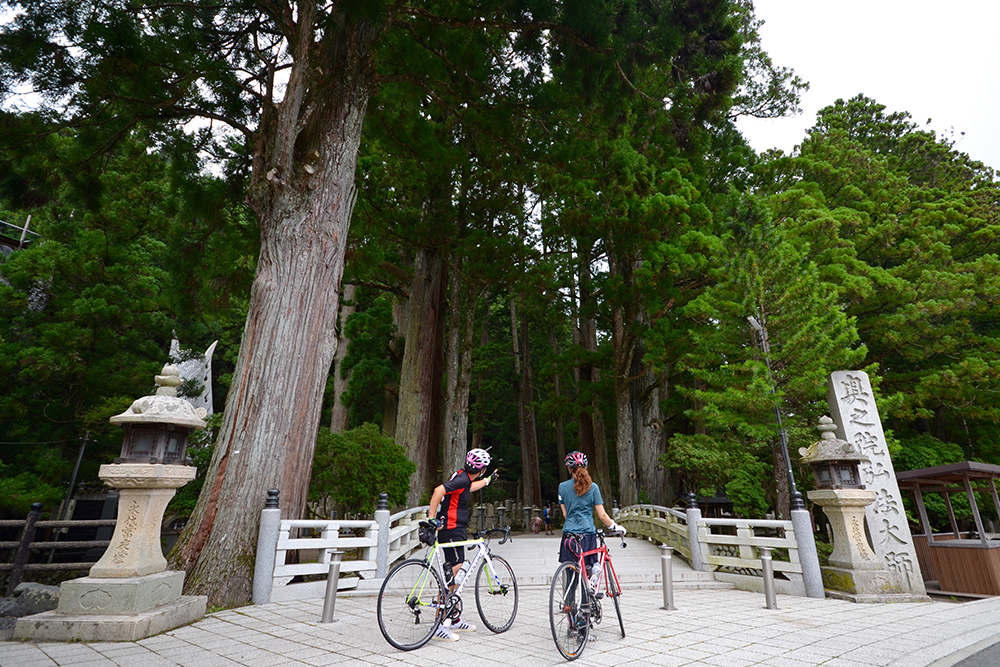 This place is where it is believed that Kobo Daishi a.k.a “Kukai” (the grand master who propagated the teachings of Esoteric Buddhism) is still alive and people can pray to him at the temple’s inner sanctum. In the center of the Kouyasan, 1,000 year old large trees are lined-up in a row. After Koyasan, you will go down a magical path surrounded by deep forests and moss. 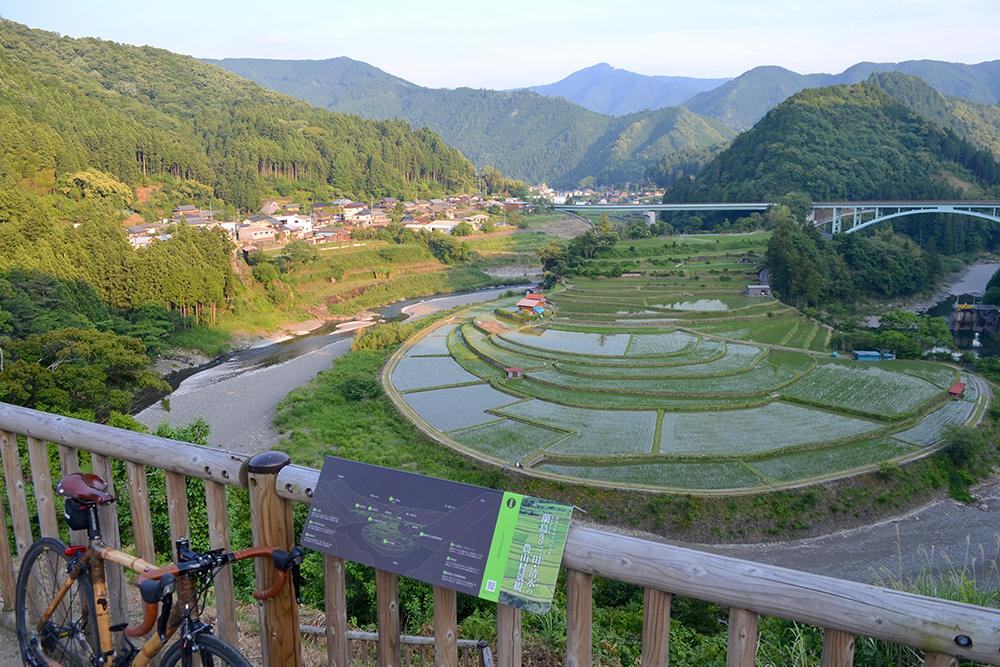 “Aragi Shima”, which is a fan-shaped rice paddy field made by using the river terraced terrain formed by the Arida River, which flows windingly around the fields. This place is chosen as one of the top 100 terraced paddy fields and has unique characteristics and beautiful scenery. You can avoid using the national highway tunnels and just use Route 19 instead to access the fields. 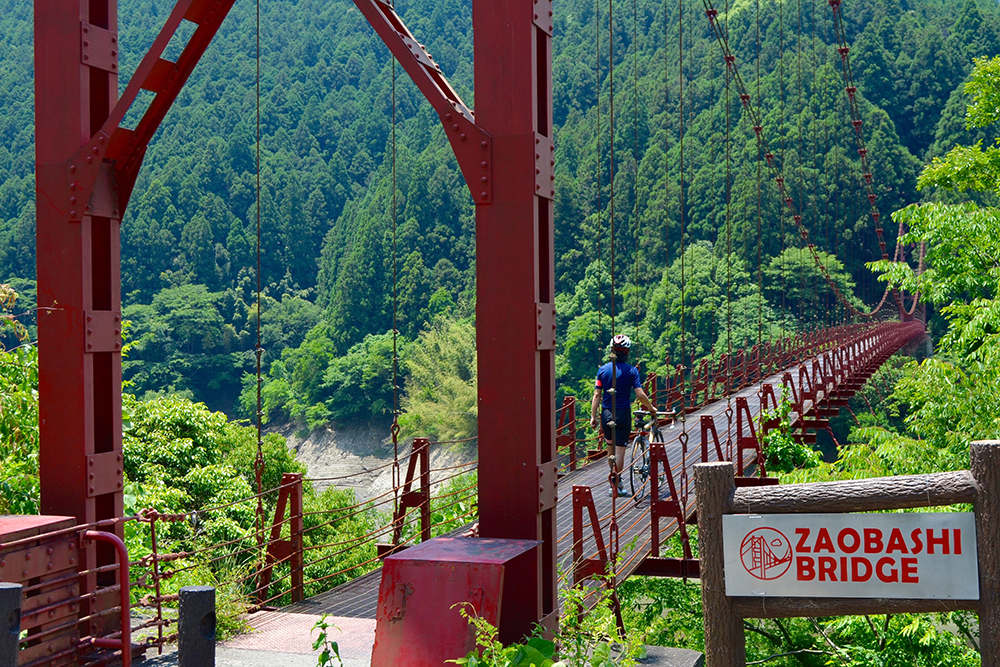 This is a crimson suspension bridge called “Zaobashi”, which is suspended over the Futakawa dam lake.
You can experience the thrill from the swaying of the bridge as you walk across it with the surface of the water far below your feet. This is Route 480, where you can enjoy a beautiful landscape with good visibility, which the Arida River flows along. 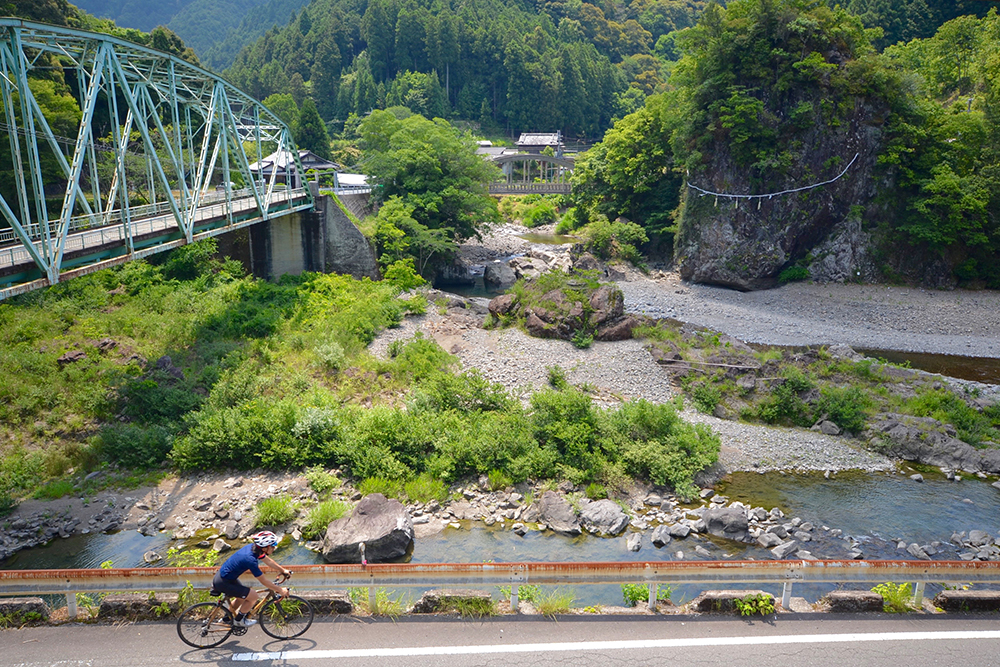 After you pass Koyasan, ride along the abundant Arita River, where you will have a reverence for the marvels of nature, such as Iwakura Shrine, in which the great rocks are believed to be part of a “Goshintai” (body of a God). 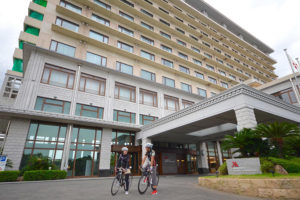 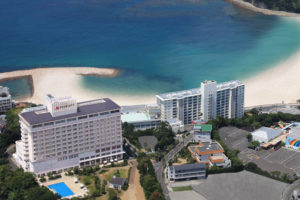 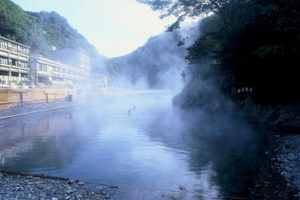